From the a cappella intro on "I Feel Free", to the tumultuous rhythmic underpinnings of "N.S.U"., Cream's debut album FRESH CREAM was a pronouncement that drums and bass would no longer be limited to the role of background instruments, that rock guitarists would henceforth be judged by the standardof Eric Clapton's soaring, lyric signature, and that emotional/instrumental content is as important as the singer and song. To appreciate the energetic slant Cream put on traditional blues check out their manic, up-tempo version of Muddy Waters' "Rollin' And Tumblin'". And where many bands routinely ripped-off folk and blues artists, Cream made sure people like Robert Johnson ("Four Until Late"), Willie Dixon ("Spoonful"), and Skip James ("I'm So Glad") got both credit and royalties, while expanding the audience for pure blues music.

Fresh Cream, the album that introduced this seminal super-blues trio to America, was perhaps a bit too blues-based to do the advance hype ("Clapton is God!") justice. Two of its three best-known tracks, after all, were blues covers; it was Disraeli Gears that turned Cream into a "supergroup." Here they pursue the psychedelic ideals of the era with total abandon (the LP cover art still stands as one of the 1960s' most striking designs), merging these ideals with their take on the blues and adorning the amalgamation with some superb pop craftsmanship. Of the 11 originals here, four--"Tales of Brave Ulysses", "SWLABR", "Strange Brew" and "Sunshine of Your Love"--earned major airplay. This, their excess-free greatest moment, does the Cream legend proud. --Bill Holdship

When Cream released WHEELS OF FIRE, they had established themselves as the premier blues-rock band due to the success of their first two albums and the extraordinary chemistry between the band's members. As a result of this synergy, Cream also enjoyed a fiery live reputation. The double-album represented both sides of their musical persona. The first record was a studio job, where the band mixed in originals with covers of Howlin' Wolf ("Sitting On Top Of The World") and Albert King ("Born Under A Bad Sign"). The songs written by the band all contained unique touches. "As You Said" found Jack Bruce putting his bass down and picking up a cello, "Pressed Rat And Warthog" sounded like an English folk tale due to Ginger Baker's clipped recitation and the inclusion of baroque horns, and "White Room" overflowed with waves of Eric Clapton's wah-wah-drenched guitar.
The second record was recorded over a four-day span at San Francisco's Winterland and Fillmore West. Extended versions of "Toad" and Willie Dixon's "Spoonful" demonstrate the band's intricate interplay, but most impressive is a blistering reading of Robert Johnson's "Crossroads", in which all three members seem to be soloing simultaneously in a jaw-dropping display of fury and bravado.

After less than 3 years in existence, and some 15 million albums sold, GOODBYE was Cream's farewell release. Baker, Bruce and Clapton indicated at the time that they were burned out on the concept, the touring, the improvisational "battles", and each other. The live cuts ("I'm So Glad", "Politician" and "Sitting On Top Of The World") are indicative of how the band's concert chemistry had evolved from earlier live recordings (such as those on WHEELS OF FIRE and LIVE CREAM, VOLUMES 1 & 2).
But what's most striking about GOODBYE is the charm and craftsmanship of their last studio tracks, indicating that Cream was far from played out creatively, and illustrating how strong their songwriting skills really were. The Beatles' influence is readily apparent on each studio track, the most famous being Clapton's "Badge", featuring George Harrison. Bruce's "Doin' The Scrapyard Thing", with its mixture of funk and the English music hall, points to the directions he would pursue on SONGS FOR A TAILOR and his other underrated solo albums, while Baker's use of odd metres on "What A Bringdown" anticipates "Do What You Like" on BLIND FAITH. 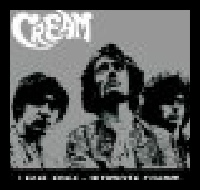 Coinciding with the Cream reunion of all the three original members, I Feel Free--Ultimate Cream collects the best of Cream's work. Cream--Eric Clapton (guitar, vocals), Jack Bruce (bass, vocals) and Ginger Baker (drums)--formed in 1966 and disbanded in 1968. In a little over two years, they released four groundbreaking albums, played over 300 gigs and secured worldwide acclaim and success with their unique take on electrified blues. They produced some of the most enduring rock anthems including Sunshine of Your Love, I Feel Free, Strange Brew and Crossroads.

Cream Singles A Sides & B Sides