Brian Epstein did not invent the Beatles he helped polish the group’s appearance throwing away the leather jackets and wearing collarless grey suits which made them look more professional and presentable.

He moved quickly and on the 1st January 1962 he had arranged an audition with Decca Records where Brian Poole and the Tremeloes had also auditioned and were chosen instead.

Not deterred by the set back within six months they had been signed by George Martin the A & E manager of EMI Parlophone records who had insisted on a change of drummer. In August Pete Best had been replaced by Ringo Starr and in October they released their first single “Love Me Do”.

In 1957 sixteen year old John Lennon with some of his Liverpool school friends formed a skiffle group called The Quarrymen. Fifteen year old Paul McCartney joined the group and in 1958 he introduced his friend George Harrison to play lead guitar. Changing their musical direction from skiffle to rock n’ roll in 1959 they changed the group name to Johnny and the Moondogs and reached the finals of the TV Star Search competition held at the Liverpool Empire Theatre.

Early 1960 Stuart Sutcliffe a friend of John’s from Liverpool College of Art sold a painting and invested his earnings by purchasing a bass guitar. He joined the group and later they changed their name to The Silver Beetles. Allan Williams club owner, booking agent became their manager and they entered music promoter Larry Parnes auditions for a group to back Billy Fury on a tour of northern England and Scotland.

They didn’t get that job but in May that year Larry Parnes offered them a seven day tour of Scotland as the backing group for Johnny Gentle. 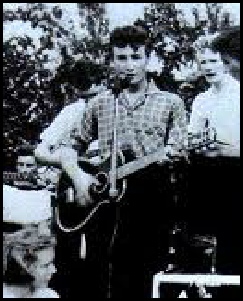 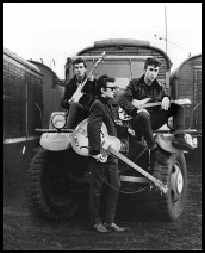 In August The Beatles were booked at their first Hamburg venue the Indra Club, run by Bruno Koschmider. They needed a drummer so Pete Best left the Blackjacks to join the group and around this time they changed their name to the Beatles. In October when the Indra club closed the group began playing at the Kaiserkeller Club and then later at the larger Top Ten Club.

In November George was deported by the German police authorities because at the age of seventeen he was underage and unable to continue playing at the clubs without a work permit.

The rest of the group continued without George but in December Paul and Pete Best were arrested for arson when they ignited an object in the Bambi-Filmkunsttheater cinema where they were staying. They were later deported by the German police authorities.

Stuart remained in Hamburg and John returned to Liverpool on his own. Stuart had decided to leave the group and he enrolled at the Hamburg College of Art to study painting. He stayed with his German girl friend Astrid Kirchherr who was the instigator of the Beatle haircut. In February 1961 the Beatles performed their first show at the Cavern Club in Liverpool, they appeared nearly 300 times between February 1961 and August 1963.

When George had turned eighteen Peter Eckhorn the owner of the Top Ten Club took The Beatles back to Hamburg for a three month engagement from the start of April to the end of June.

In June while in Hamburg the producer Bert Kaemphert asked the Beatles to back Tony Sheridan as the “The Beat Brothers” on a number of recordings for Polydor Records which included "My Bonnie". The record was released and in October it it was asked for at the NEMS record store in Liverpool which was run by Brian Epstein. He had seen posters around Liverpool advertising Beatle shows and had read about them in the pop paper the Mersey Beat. In November Brian Epstein and Alistair Taylor his work colleague visited the Cavern to see a Beatles performance and was that impressed he arranged a meeting and asked if he could manage them, which was agreed. 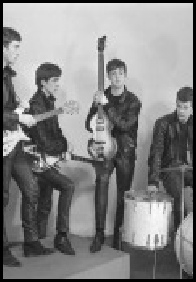 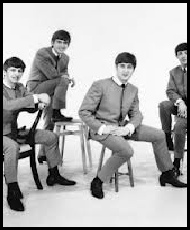 The tenacity and foresight of Brian Epstein, the inventiveness and quality of The Beatles song writing and George Martin’s music arranging made them the major force in music throughout the sixties.