4. No Particular Place to Go

Dozen Berrys was The Bible for all Brit rockers ..this collection contains stuff you can’t get elsewhere .. "It Don’t Take But A Few Minutes" for instance,a great example of his C &W stylings cannot be found anywhere on his current releases plus this set contains Rockin At The Philharmonic, and Ingo; two great rare instrumentals . This 'two- fer' is an interesting and welcome re-release from this British label BGO (Beat Goes On )Check out their other Chuck Berry two -fer releases 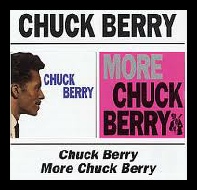 Two original albums with classic tracks including Maybelline, Back In The USA, Reelin' And Rockin', Brown Eyed Handsome Man  and "Johnny B. Goode" which is one of the most widely covered rock and roll songs in history and amongst others has been recorded by The Beach Boys, The Rolling Stones and The Sex Pistols.

“come On" is a song written and first released by Chuck Berry in 1961. The Rolling Stones released a version as their debut single in 1963. They also recorded Round And Round, Carol, and Little Queenie which feature on this compilation.

I Got To Find My Baby, Almost Grown, Down The Road A Piece, Oh Baby Doll, Mad Lad, Worried Life Blues, Betty Jean.  School Day (Ring Ring Goes The Bell), Confessin' The Blues and two songs the Kinks released on their first album Beautiful Delilah and Too Much Monkey Business.